Some players make penalty kicks look so simple, as though they can convert them blindfolded.

But they are much more complicated than that.

With the game on the line in the 88th minute of the team’s season opener with FC Buffalo, Fernandes faced pressure to convert one so the hosts could salvage a draw and a point in their National Premier Soccer League season opener last Sunday.

He did as Rochester walked out of Charles A. Schiano Sr. Field at Aquinas Institute with a 1-1 tie in their season opener.

Fernandes, 23, certainly had a lot of pressure on the line.

With the Lancers trailing 1-0, Fernandes was knocked down in the penalty area by goalkeeper Connor Cable. Rochester was awarded a penalty kick.

“I saw the space open up, running behind and then once I was within that position, I knew the goalie was coming out,” he told co-hosts Andrew Battisti and Joe Sirianni on the Soccer is a Kick in the Grass radio show Monday night. “So, I just wanted to get in touch around him and lucky enough I went by him and he took me out. I bounced right back out right after it because I wasn’t sure if the ref was going to call it or not. I shot the ball, but he already called the penalty kick. So. it worked out.

Fernandes took the attempt and drilled a shot down the middle of the net while Cable dove to the left. Fernandes said he made sure he hit the ball hard.

“I’ve been taking penalties for as long as I can remember,” he added. “Back in the day I would train, putting the ball in one spot and just run up and put it right in my preferred spot, just smash it. Then there’s a few times where I was being a little inconsistent. So, I tried to change my approach a little bit.”

He talked about the cat and mouse game between shooter and goalkeeper.

“In this day and age, there’s a lot of guys who are more patient when they’re taking penalty kicks,” Fernandes said. “For example, Bruno Fernandes from Manchester United and Neymar from PSG. When they take penalty kicks, they have a slower approach, and kind of play with the goalie a little bit and wait for him to make his first move and they shoot.

“It’s a scary game sometimes but I was confident on my run up. I was staring at the goalkeeper the whole time. I didn’t take my eyes off him. I did a little drag step. It wasn’t as much of as what Bruno Fernandes does, but I was just waiting for him [Cable] to move, He showed me that he was going to go to his right a little too early and then I just blasted it right in.”

Only three minutes before Fernandes’s goal, Cleveland SC grabbed the lead during a scramble in the Rochester area. Goalkeeper Brian Wilkin dropped a shot when he hit the ground. He blocked a Kyle Cusimano shot. Forward Vinnie Bell, who was on the ground, inadvertently blocked Admir Suljevic attempt. The ball came to Cusimano, standing to the left of the net, and he rifled a shot into the upper corner for a 1-0 lead.

“Cleveland’s always been a great opponent of ours,” the one-time Churchville Chili High School standout said. “Throughout the years we’ve always gone back and forth. But to give him a goal in the 85th minute and be able to bounce back and grab a late goal and steal a point out of the game is pretty, pretty good for us. We could have lost three points, but we fought back and grabbed one. Pretty proud of the group and our resiliency and ability we had a bounce back was great.”

The Lancers, who are tied with Cleveland SC in the Rust Belt Conference Division lead because no other team played last weekend, hosts FC Buffalo in the latter side’s season opener at Charles A. Schiano Sr. Field at Aquinas Institute in the second game of a doubleheader Sunday at 5 p.m. The match follows the Lady Lancers encounter with New Jersey Copa in a United Women’s Soccer match at 2 p.m.

“I expect to see a hard-fought match,” Fernandes said. “They have a lot of talent over on the side of that city. They’re always a team we battle against every year who’s always coming to play, and they work hard. So, we got to come ready to play. I think it will be a different style of a match than Cleveland was, but I think it’ll still be a good, hard fought battle.” 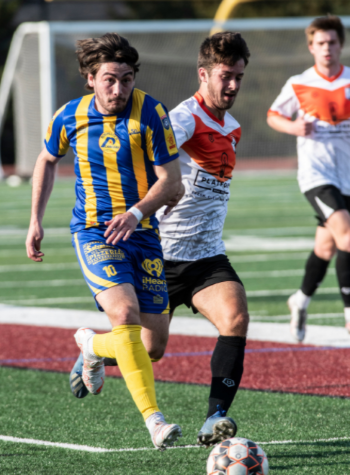