A Rochester soccer legend as a player, coach and executive.  Began his professional soccer career with Toronto Italia in the National Soccer League of Canada in 1976 before moving to the Montreal Castors in 1977, where he won a championship. Joined the Lancers as an 18 year old in 1978 and was named team Rookie of the Year.  Was a regular starter for all 3 of his seasons with the Lancers, ending as 4th all-time in points and goals and 2nd all-time in assists.  Played one more season in the NASL for the Jacksonville Tea Men in 1981.  Earned one cap for the Canadian National Team in 1980. 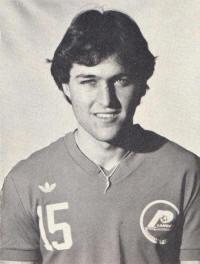 Joined the Major Indoor Soccer League’s New York Arrows in 1978 and helped lead the Arrows to the title.  Played one season each for the Detroit Express and the Buffalo Stallions before joining the Baltimore Blast in 1982.  In 3 seasons with the Blast, scored 112 goals in 170 regular season matches (9th all time) and tallied 43 post-season points (5th all-time). Was an important factor in the Blast making 3 straight MISL finals’ appearances, including winning the title in 1984.  Finished his playing career with the Cleveland Force in 1986.

Became the first coach of the Rochester Raging Rhinos in 1996 and, in 9 seasons at the helm, brought home 3 A-League championships in 1998, 1999 and 2001 and the Lamar Hunt US Open Cup title in 1999, with the Rhinos leading the league in attendance in each of his 9 years as coach.  Earned A-League Coach of the Year honors in 1998. Returned to the Rhinos in 2009 as the General Manager and was named President and Chief Operating Officer of the team in 2011.