The captain of the Lancers in their first years in the NASL.  Started his career in his native Scotland playing for hometown side St. Mirren.  Came to Rochester in 1969 and immediately became the anchor of the Rochester backline and helped the team win the NASL championship in 1970 and the regular season title in 1971.  Earned NASL All-Star honors 4 times with the Lancers. Moved to the Cosmos in 1976 and Team Hawaii in 1977. Became Tulsa’s first pro soccer player in 1978 when Hawaii moved to Oklahoma and became the Roughnecks.  Finished his 10 year NASL career with the Toronto Blizzard in 1979. 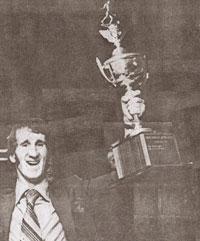 Began his coaching career at Rochester’s Cardinal Mooney High School in the early 1970’s.  Earned his first pro coaching job with Team Hawaii in the 1977 NASL season as player-coach and, after his retirement from playing soccer, managed the Tulsa Roughnecks in 1980 and 1981.  Coached the men’s soccer team at Northeastern State University in Tulsa from 1995-2005 and was the founder and first coach of the women’s team as well. Established the Bixby Highlanders Football club in 1997 and became their Director of Coaching for youth from age 5 to 19.  A 2012 inductee into the Oklahoma Soccer Hall of Fame. Opened his first Tulsa restaurant in 1981 and has been in the business off and on ever since. Created the “Rochester Lancers Dip” as his tribute to the city and the club he captained. One of the most popular and respected players to ever wear the Lancers’ blue and gold.