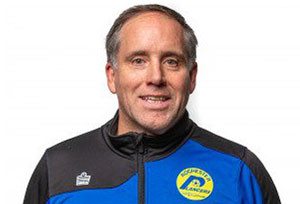 Adam has coached at a variety of levels including youth soccer, within the Olympic Development Program (ODP), high school soccer, at the college level and professionally. As a coach, Schwartz has experienced tremendous success at all levels of soccer.

Schwartz holds a USSF National “B” License and USSF National Youth License, along with possessing multiple other soccer credentials. Currently, he is the girl’s head coach at the Aquinas Institute of Rochester. In 2017, he earned the honor of NY State Coach of the Year (Class B) as he led his team to a state championship during his first season at Aquinas.

Schwartz earned his Bachelor of Science degree in Elementary Education from Alfred University in 1992, and he went on to earn his Master of Science degree in Elementary Education from Nazareth College of Rochester in 1998.  In 2007, he earned his Certificate of Advanced Studies in Educational Leadership from SUNY Oswego. Schwartz taught fifth and second grades for several years, along with being an assistant principal in the Canandaigua City School District.

Schwartz went on to become a Credentialed Alcoholism and Substance Abuse Counselor (CASAC) through OASAS. Moreover, he gained the distinction of becoming a certified member of the International Certification and Reciprocity Consortium. Currently, Schwartz works full time as chemical dependency therapist at Huther Doyle, which is an outpatient facility in Rochester, NY