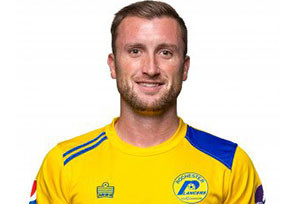 Born and raised in Buffalo, NY 30 year old Boughton has had an extensive soccer career. He played college soccer for Medaille College where he holds the NCAA Record Holder for Career Assists with 82 and the NCAA Record Holder for Career Assists per game with .95. Gary is a 2x NSCAA Scholar All-American, 4x NSCAA Regional All-American, 2x AMCC Conference Player of the Year and 4x AMCC 1st Team All-Conference player.

Favorite # and Why?
10, College Number

Do you play or have you played other sports?
Basketball, Football, Kickball, Cornhole, Kan-Jam, Rock-Paper-Scissors

Do you have any hidden talents/hobbies people don't know about you?
Yes

If you could have dinner with 3 famous people who would it be and why?
Jimmy Fallon and Justin Timberlake, because I feel like I'm the 3rd wheel they're missing on the bro-mance tricycle.

What are your career plans after soccer/school?
Coach