A storybook return for Doug Miller as Lancers win 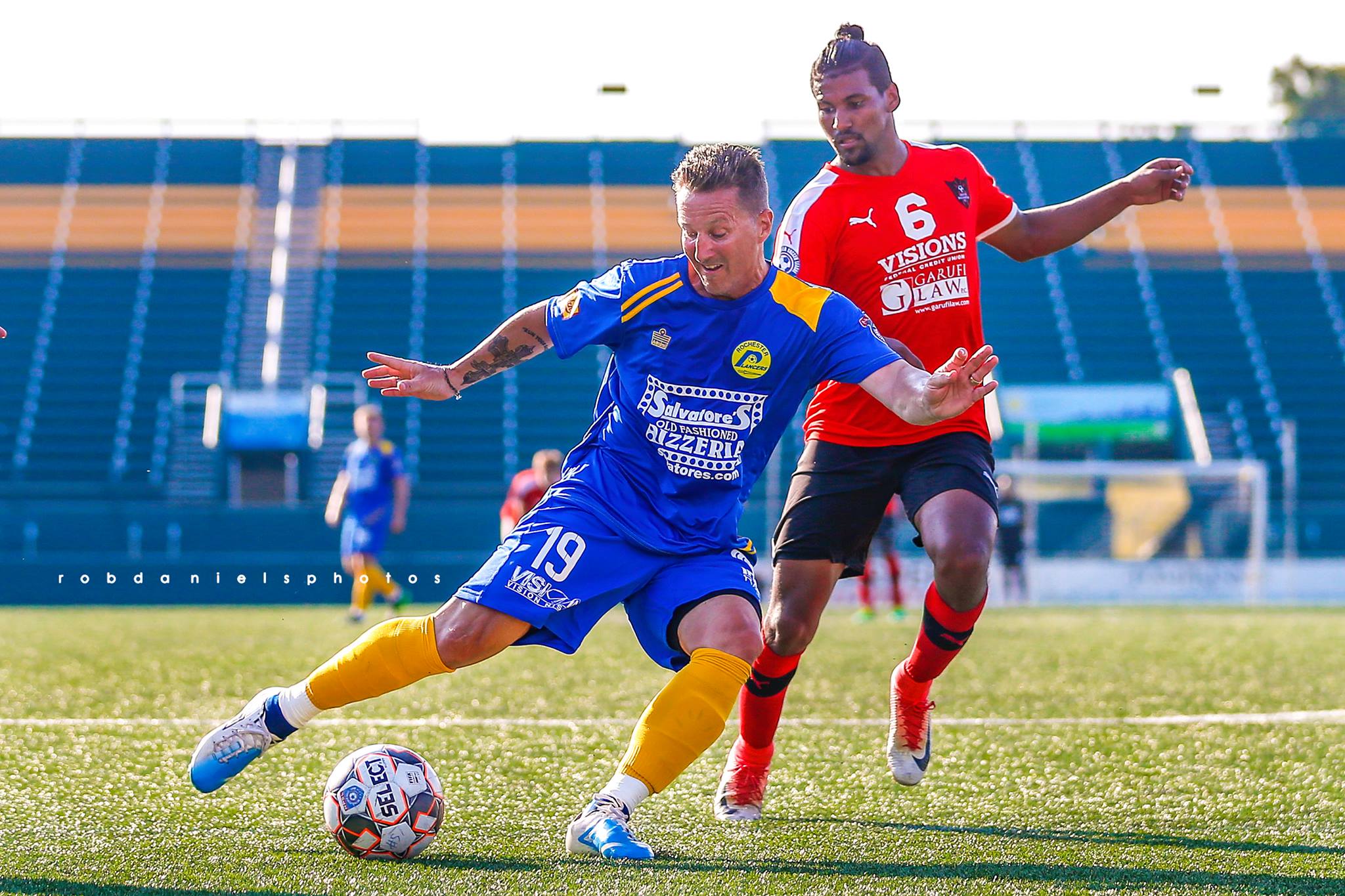 Doug Miller (19) came out of retirement and delivered
a goal in the 59th minute. (Photo: ROB DANIELS)
The applause began as soon as fans saw Doug Miller make his way toward the scoring table and hand his substitution card to the fourth official. And then when referee Charles Murphy waved Miller onto the pitch, the crowd at Charlie Schiano Sr. Field at Marina Auto Stadium rose to provide the long-time Rochester Rhinos soccer hero a welcome to the stadium he built.
For a brief moment on Saturday evening, Miller was no longer the Rochester Lancers coach. Instead, the 49-year-old former scoring dynamo was Father Striker, the oldest player on the field — and the one with the most stories to tell.
And now he has another.
Miller hadn’t been on the pitch for 30 seconds and he was celebrating his first outdoor goal in 13 seasons. Will Stone’s steal and then perfect pass into box set up Miller, who found space between the Greater Binghamton FC Thunder defenders and was free to drive it into the net.
The goal gave the Lancers a 3-1 lead in the 52nd minute — and provided a storybook moment for Miller, his wife Kari, and daughters Kayla and Kalista.
Who scripted this?
“For that to play out the way it did, 24 seconds in … ” Miller said. “The first thing I thought was, God is good and where’s my wife so I could go and kiss her.” Which he did on the sideline next to the Lancers bench as the crowd cheered wildly and as his players celebrated and cheered as well. “He’s a legend, he’s always had a scoring touch,” Stone said. “He’s a massive name in these parts and he’s a hero to so many.” Some of the players on the pitch for both teams hadn’t even been born when Miller scored the first-ever goal at Frontier Field in 1996. And those same players weren’t even teenagers when he scored the last goal at Frontier Field in 2005 — his last outdoor game before Saturday.
Binghamton defender Brion Jackson even reached out his hand to say welcome and congratulations on a great career as Miller jogged toward the middle of the field as he entered the game.
“They’re young kids, a lot are 18- and 19-years-old and they could be my children,” Miller said. He taught them a few lessons on Saturday on his goal. He had moved toward the ball to apply pressure from the middle as Stone attacked from the right. Stone then stole it, passed to the middle and Miller was by himself. Not bad for a guy who hadn’t played a competitive game outdoors in 13 years. “I ran to try to press the ball and then Will stole it and I knew as long as I backpedaled I’d be in the seam,” he said. Stone made the perfect pass and Miller had the goal. “Will stripping the ball and getting it to the front of the net and being able to finish it, it was a gift,” Miller said. “I’m blessed.” Said Stone: “Assisting Doug Miller was awesome. I love him.”
Miller didn’t score again before exiting in the 80th minute, his un-retirement over after 28 minutes. Stone, however, wasn’t finished doing a great imitation of his coach. As Rafael Godoi boomed a free kick from 40 yards away deep into the goal area, Stone leaped to knocked it down with his chest, then executed the acrobatic bicycle kick for a goal in the 66th minute for a 4-2 lead. Stone then made a nifty touch pass to the box that Isaac Kissi directed into the net for a 5-2 lead in the 71st minute.
The Lancers did give up another goal in the 86th minute on a penalty kick and came away with the 5-3 win.
Miller said there were three objectives against the winless Binghamton team (0-10, outscored 59-7):
“The first two I’m pleased with,” he said. Scoring his own goal figured somewhere on another list. “Why do we play the game?” Miller said. “It’s for the memories.”
Newest Lancers Hall of Fame members
Former goalkeeper Shep Messing, an icon from the old North American Soccer League and later the Major Indoor Soccer League, headlined the induction ceremonies for the five newest members of the Lancers Hall of Fame. Messing played for the Lancers in 1979, posting a 1.11 goals-against average while facing 237 shots. Also inducted were Frank Tata, an original member of the Lancers playing roster; founders Rudy LaPore and Patsy Frank; and former TV play-by-play voice Ron DeFrance.