Soccer Fans, I’ve been doing this crazy soccer thing since 1980. Most of my friends have normal hobbies. Mine is promoting the game of Soccer. I fell in love with the game in 1970 going to my first NASL Lancers game at the age of 10 years old. I lived with the pain of the original Rochester Lancers and Rochester Flash folding and I regretted not helping save them.

I played soccer all my life. In 1980, I was asked to take over the IFSL adult soccer league. My wife Linda and I ran the league for 20 years and that’s when the soccer addiction started. I saw the joy the sport gave to so many and the lifelong friendships the game brought. Players that missed their chance at stardom shined in the IFSL. Former Lancers and Flash legends played some bonus years in that great league.

In 1993, I started testing promoting soccer on this new thing called Cable TV. At first it was the IFSL all-star game and soon we covered a tournament in Italy that changed my life. I was watching a soccer show while in Italy and the host was wearing crazy clothes and his wacky character attracted my attention. I knew that’s what American soccer needed, and I was prepared to fill that role.

The “SoccerSam Character” was developed with the hope to get non-traditional soccer fans to watch my weekly TV show. I soon brought the same character to radio in 1995. I used my TV and radio shows to help promote local soccer, the Buffalo Blizzard and the new Rochester Rhinos. I immediately saw the effect this new exposure had on the fans and players. Producing weekly TV and radio shows was now part of my soccer hobby. 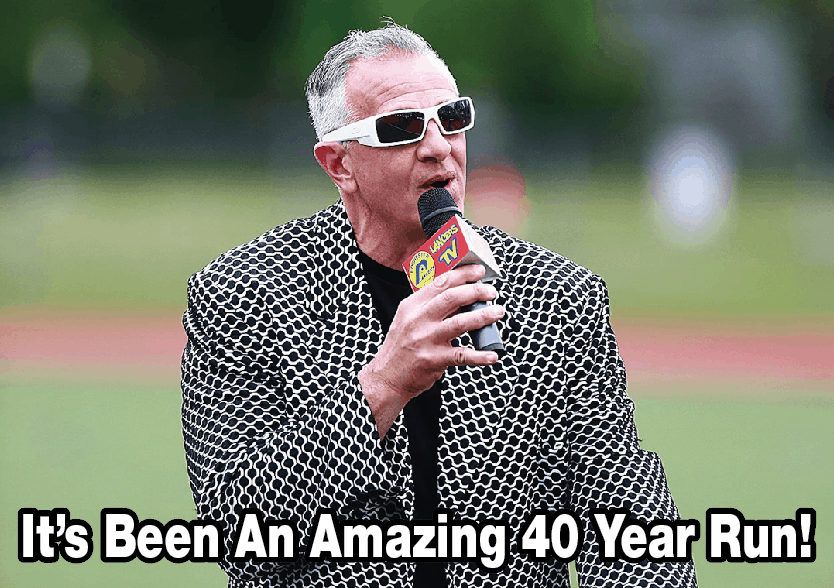 I was fortunate to be part of the Rhinos from 1996-2009, “Soccer Town USA” with championships and record crowds. I traveled the country covering the Rhinos and studying what worked and what didn’t work in several cities. My role changed several times throughout the years with the Rhinos, and I had the privilege to work with some of the greatest owners, players, fans and staff members this sport has ever seen.

In the late summer of 2009, I took a break from the Rhinos and soccer. I lost 200+ pounds but didn’t lose my passion for indoor soccer. In 2011, the Indoor Lancers joined the Major Indoor Soccer League. Several of my long time Rhinos friends joined me and we enjoyed great crowds at the Blue Cross Arena for four amazing seasons. We led the league in attendance and workman’s comp claims, and we took a break after the 2015 season.

I was going nuts without being part of a team. In 2017, the Outdoor Lancers returned to play with two teams: the Lady Lancers of United Women’s Soccer League and the Men’s Lancers of the National Premier Soccer League. Again, I brought my Rhinos and Indoor Lancers friends along for the ride and we had great crowds for both teams. Our UWS Lady Lancers are the only women’s soccer team in town. After the Rhinos folded, our NPSL Lancers are the only men’s professionally operated team in Rochester N.Y.

Indoor Soccer is my true passion. I fell in love with this game in the 70’s watching the original Lancers play in the first ever indoor soccer tournament. In the 80’s and 90’s, I traveled around the country supporting the Buffalo Stallions and Blizzard. My 2011-2015 Indoor Lancers was a very special time for me. Each home game was a party, and our away games were an adventure. I met the greatest players, fans, staff members and lifelong friends during this amazing era.

In 2018, I had the opportunity to return to the great game of Indoor Soccer and the Lancers joined the M2 league. Some of the newbies call my sport Arena Soccer but it will always be Indoor Soccer! Our Indoor Lancers returned with six sold-out games at the New Dome Arena and a wild playoff run through Chicago and Los Angeles. Again, the same cast of crazies joined me for this kickin’ great ride.

In the offseason of 2019, our M2 indoor Lancers experienced several league changes. We had the opportunity to return to the Major Leagues and join the Major Arena Soccer League. The league had grown to 17 teams in three countries. I decided to bring the team back but only on my terms and beliefs, 100% local players that would learn the game and stay grounded to my team and City. I wanted local youth players to have local role models, and fall in love with this sport like I did in 1970.

We had an amazing pre-COVID-19 indoor season in 2020. We again had sellout crowds at the Dome Arena and our fans witnessed our local Lancers playing against some of the greatest teams and players in the sport. Our final home game of 2020 was extra special with the Gary Boughton retirement game, and a huge victory against the Kansas City Comets. Our indoor season was cut short because of COVID-19 and our 2020 outdoor season was cancelled for our NPSL Men’s Team and our UWS Women’s Team.

In December 2020, two Lancers Legends and Wall of Famers who have been loyal to our Lancers family since day one, Doug Miller and Jeremy Ortiz, represented us in the first MASL all-star game in Kansas City! I was honored to be the Honorary Captain for the East-Side, and participating in the game kick-off to indoor legend Leo Gibson, thanks to my soccer brother- Brian Budzinski.

Since late 2020 we have been trying to schedule our indoor season. With COVID issues continuing in most states, it’s been a challenge. My Rhinos friend Tommy Tanner and I joined the MISL together in 2011. Tommy is now with Utica City and doing an amazing job. Ed Hale, “The Godfather,” of Indoor Soccer has been my role model and good friend since getting into this sport. Chris Economides gave me my Pro Soccer start in 1996 with the Rhinos; my lifelong friend is now the commissioner of M2, I wish him the best of luck.

2020 marked my 40th year trying to promote a sport I love as a hobby. It kills me when family and friends don’t support my teams and I usually put them on a special list. The whole youth soccer market has changed, and few coaches see the importance of bringing teams to games. The Rochester media is now stuck in Buffalo and we don’t receive any local coverage. Minimal support from the media, family & friends, and the youth soccer market, and we still had record crowds at the Blue Cross Arena and Dome Arena since 2011.

During this 40-year run I’ve had some amazing times helping the Buffalo Blizzard, Rochester Rhinos, our Women’s National Team playing the Ravens, Major League Soccer teams visiting Rochester, Western New York Flash, my Indoor Lancers, Team Brazil and most recently helping the Orlando SeaWolves. I appreciate all the amazing people that helped me over the years with my crazy hobby especially my beautiful wife Linda, and my Dream Team of two: Ashley Maria Solomianko and Kayla Klark Kent-Moreira.

I hope kids throughout the country and Rochester continue to: Feel The Kick For Life! SS