After a nationwide search and thorough vetting process the Major Arena Soccer League has selected JP Dellacamera, Shep Messing and Keith Tozer to lead the league moving forward. A former MISL player and coach, Tozer will serve as MASL Commissioner. Former NY Arrows goalkeeper Messing will become the league's first Chairman, and Dellacamera, once the TV voice for the original MISL, will become the league's president of communications/media. The trio will begin on June 15 to further grow the league in all aspects on and off the field.

For all media inquiries please contact Pete Richmire at prichmire@maslsoccer.com or by phone at (253) 278-0035. 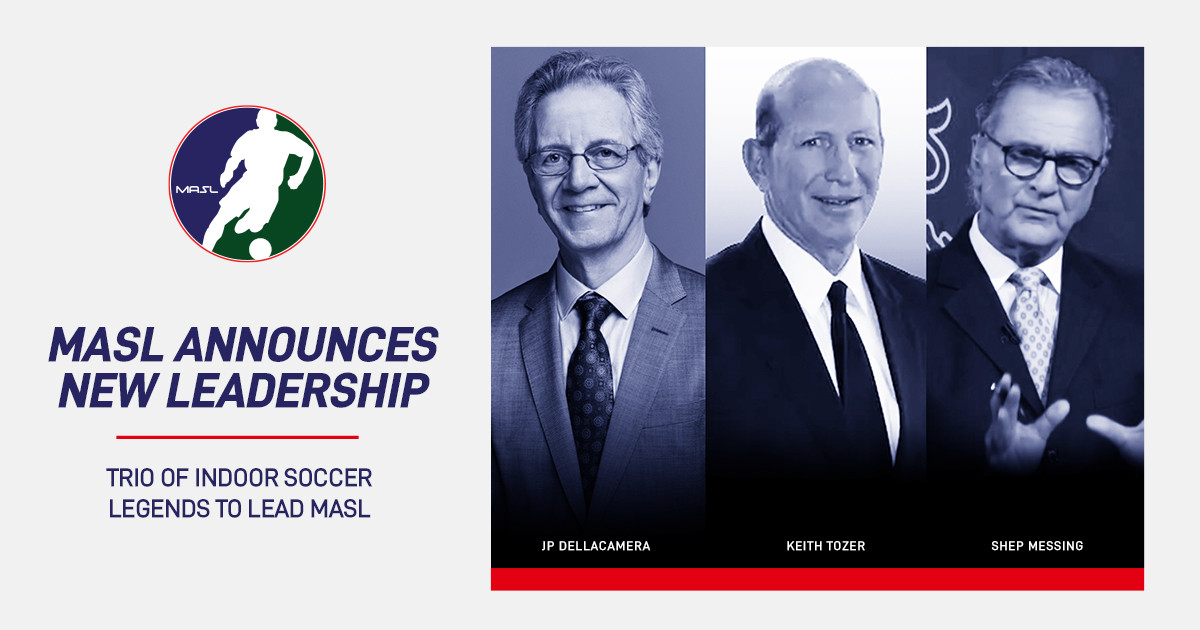 In 1978 Tozer was the first player selected overall in the inaugural MISL college draft for the Cincinnati Kids. A player in several leagues, Tozer turned a playing career into a successful coaching career. In various indoor stops, Tozer became the all-time winningest coach in indoor soccer history with over 700 wins, and six league titles, in addition to eight Coach of the Year Awards. He led the Milwaukee Wave in various leagues from 1992-2014. Tozer also guided the US Futsal Men’s National Team for 20 years, winning two CONCACAF Gold Medals.

As the trio takes the helm, Tozer's positive outlook on the future of the league shows. "Shep, JP, and I are extremely excited about working together along with all the owners, team management, coaches and players to move the game of professional indoor soccer forward here in North America. Indoor soccer has had a very rich past and a very bright future" he said.

No name is more synonymous with indoor soccer than Messing’s. As the first MISL signing in 1978, Messing gave the MISL instant credibility, which led to more big signings. Messing's New York Arrows were a dynasty, winning the first four championships. Messing was a two-time All-American goalkeeper at Harvard University, played with his teammate Pele on a New York Cosmos championship team, was a member of the 1972 United States Olympic Soccer Team at the Munich Olympic Games and capped 14 times by the United States. He is the former founder along with Pele, of Global Sport Group, LLC, an international soccer agency.

Since 2001 he has worked as a television commentator on the MSG Networks for the New York Red Bulls on Major League Soccer telecasts. He has additionally broadcast four World Cups for ESPN, along with Olympic Games on NBC and international games for Fox Sports.

A broadcast veteran of 15 World Cups (men’s and women’s), Dellacamera always refers to his early years of indoor soccer as some of the finest memories of his career. He worked for both the Pittsburgh Spirit and the St. Louis Steamers as their TV Voice, and later became the Voice of the MISL for their game of the week package on ESPN. He was recognized by the National Soccer Hall of Fame as their Colin Jose Media Award winner in 2018 and was inducted into the Connecticut Soccer Hall of Fame in 2019. He has been the TV Voice of the Philadelphia Union since 2010 and has worked for ESPN, FOX, NBC, ABC, and CBS Sports. Dellacamera and Messing are also Managing Directors of the Connecticut Fusion of UWS (United Women's Soccer). Dellacamera will continue to call games for the Philadelphia Union and for Fox Sports.

Former Commissioner Josh Schaub stated, “We couldn’t be more proud of the MASL’s accomplishments over the last 5 years. I couldn’t think of a finer group who not only has the required skills, but also such a great tie to the game of indoor soccer for me to pass the baton to.”

Brian Budzinski, Managing Partner of the KC Comets replied when asked about the new leadership group ,”I have never been more excited about the direction of our sport and our league as I am today. Shep, Keith, and JP all bring impeccable backgrounds and reputations to the MASL leadership."

The Major Arena Soccer League represents the highest level of professional indoor soccer in the world. The MASL features teams across North America, with teams playing coast-to-coast in the United States and Mexico, with players from over 15 different countries. The MASL is currently incorporated as a 501(c)6 not for profit corporation formed to promote the
business and sport of indoor soccer.