Playoffs in Chicago!
Lancers to take on Mustangs March 21st

Playoffs. The Lancers will travel to Chicago this Thursday, March 21st and face the 1st place Chicago Mustangs at 7PM at the Grand Sports Arena for the Eastern Division Playoff Finals.

The game will be streamed and can be viewed on both the Chicago Mustangs or Rochester Lancers Facebook Pages. The winner of this game moves on to the League Semi Finals in California, to face the champs from the Mountain & Pacific Divisions. 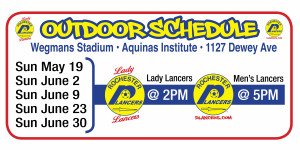