The first Rochestarian to play professional soccer.  Played under original Lancer Don Lalka at Eastridge High School.  Started his collegiate career at Monroe Community College from 1971-72, becoming an All-American in 1971 on the NJCAA national runner-up side.  Played at SUNY Brockport from 1973-74, earning 3rd team All-American honors in 1974 as Brockport won the NCAA Division III Title.  Scored all 3 goals in Brockport’s 3-2 four overtime win over Binghamton in the NCAA Regionals that season. 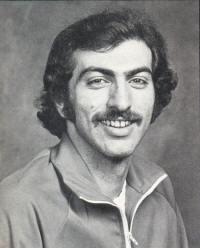 The first draft pick of the Lancers in 1975, played 6 seasons for the NASL club, including 2 playoff matches in 1977 against the St, Louis Stars in the first round and the Cosmos in the semi-finals at Giants Stadium in front of 73,699 fans, the largest crowd ever to see a Rochester sports team.  Served as player-coach for the American Soccer League Rochester Flash from 1981-83.

Started coaching soccer at Bishop Kearney High School and was an assistant coach at his alma mater, MCC, from 1978-84.  Became the Head Coach at SUNY Fredonia in 1985, leading them to 4 NCAA tournaments and 2 final fours. Named head coach of the MCC Men’s Soccer team in 1990 and is one of the most successful soccer coaches in Rochester collegiate history, winning over 300 matches, his teams making the Regionals 16 consecutive years, winning the Regionals in 1995, 2002, and 2004.  Recognized by his peers as Region III Coach of the Year six times and Northeast Coach of the Year twice.

A founding member of the Rochester Futbol Club and the Director of Coaching for the organization since 2003. Holds the NSCAA Advanced National Coaching License and conducts soccer clinics throughout the country.  A member of 6 Halls of Fame: Eastridge HS, MCC, SUNY Brockport, NJCAA Soccer, the Italian-American Community Center Sports and the Rochester Lancers.