One of the longest-serving members of the Rochester media who covered the Lancers throughout their NASL years.  Attended Pembroke High School and Adelphi University, where he received his bachelor’s degree in Business. Joined WHAM Radio in 1971, was named News Director at WAXC Radio and in 1974 became Sports Director at WHEC-TV, doing many stories and match coverage of the Lancers in that time period.  Was the play-by-play announcer for the Lancers on local television during the later 1970’s, including the August 1977 playoff match at Giants Stadium against the Cosmos in front of over 77,000 fans. 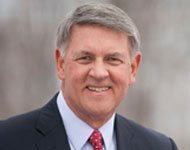 After covering sports in Rochester for over 30 years, became the primary anchor of the WHEC evening news in 2005.  He has won a variety of awards including numerous sportscaster of the year awards in New York State and an Edward R. Murrow Award for Best TV Newscast.  A member of the New York State Broadcasters Hall of Fame, Frontier Field Walk of Fame, the Section 5 football and basketball Halls of Fame, the Chase Scholarship Basketball tournament Hall of Fame and the Rochester Americans Hall of Fame.

Retired from WHEC-TV in December of 2012 after a 44 year career in broadcasting.  On November 4th, 2014, Rich Funke was elected to serve Rochester, Monroe County and Ontario County as New York State Senator in the 55th Senate District.