Years with the Lancers: 1968-1980 (Reporter for the Times-Union and Democrat & Chronicle)

One of the longest serving members of the Rochester sports media.  Escaping war in his native Latvia, came to the US in 1947 with his parents at the age of 11, settling in Windham, Connecticut.  Joined the US Air Force and started as a journalist by writing for the base newspapers. Joined the Willimantic Chronicle after his military service and then the Hartford Current. Came to Rochester in 1967 and covered sports for the Times-Union from 1967-76, after which he moved to the Democrat and Chronicle.  Covered the Lancers for longer than any newspaper writer. Also served the sport of soccer as a referee for high school and amateur matches for many years. 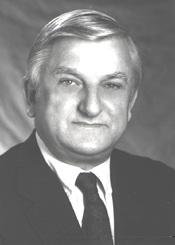 After his newspaper career, worked in radio at WVOR, hosting "Sports Beat." in the 1980s. Produced “Soccer is a Kick in the Grass” on WYSL Radio from 2007 to 2008.  Owned his own media company, Alexander Communications. Inducted into the Frontier Field Walk of Fame in 2002, won the Rochester Press-Radio Club's Charlie Wagner Award for sports writing excellence in 1978 and was a president of the Press-Radio Club.

Passed away on October 1, 2014 at the age of 78.  Predeceased by his wife, Maria and survived by his sons, Eric, Curt (Kelly), Mark (Kaitlin) and Thomas (Jane) Grassadonia; 4 grandchildren, 2 great-grandchildren and his close friend and longtime companion, Lorraine "Cookie" Giffert.

Rochester Lancers Wall of Famer Michael Lewis - “Bruno was never afraid to hold their feet to the fire, whether it was the owners, management, players or coaches. He was never afraid to take a controversial stand on a subject, even if meant he would wind up in the middle of it.”