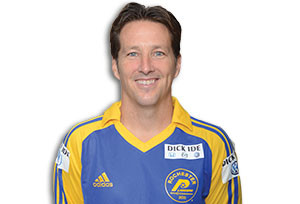 Coaching
Doug Miller had a very successful 2017 season coaching the Rochester Lancers to 6-4-2 record missing the NPSL playoffs by one point. After the season, Doug became the coach of the Rochester RiverDogz with Marc Mandell helping the DogZ advance to the first round of the US Open Cup. Doug has been coaching for the better part of 25 years. Educating, inspiring, mentoring and sharing his love for the game with his players. Miller has been coaching Rochester’s youth since 1996 and has his own soccer program and facility in Spencerport, NY. Miller holds his USSF A License as well as his Youth National License. In 2014 he took the coaching duties for the Rochester Lancers and helped them win their first playoff series against the Syracuse Silverknights. Miller will take the helm again for the Lancers as they are “reborn” in the NPSL (National Premier Soccer League).
Professional
Miller came out of retirement to play for the Rochester Lancers in 2011. In the 2011-12 season, he scored 25 goals, earned 66 points and was named Team MVP. He led the Lancers and the MISL in scoring during the 2012-2013 season with 102 points including 44 goals and 11 assists and was named the 2012-2013 MISL MVP. Miller was the first pick in the 1991 MISL draft by the Kansas City Comets. The team folded before the start of the season, and Miller moved to the Baltimore Blast. When the MISL dissolved in 1992, he joined the Harrisburg Heat of the NPSL. After two seasons, he was traded to the Cleveland Crunch, where he won the NPSL championship with the team in 1994 and 1996. He played in the USISL with the New York Fever in 1994. He signed with the Rochester Raging Rhinos in 1996, and his team went to both the league and U.S. Open Cup finals, but couldn’t clinch a victory. He was recognized as a first team All Star. Over the next few years, Miller signed with the Buffalo Blizzard of the NPSL, and would balance both the Rhinos (outdoor) and the Blizzard (indoor). He signed a four year contract with the Blizzard after leading the team in scores for the 1996-97 season. He earned first team All Star and league MVP honors. In 1998, Miller led the NPSL in scoring with 102 goals, again being recognized as first team All Star. Miller helped lead the Rhinos to a victory in the Lamar Hunt U.S. Open Cup title. He earned MVP honors and scored the game-winning goal. He left the Rhinos in 1999, but continued with the Blizzard until 2001. Later that year, he joined the Hershey Wildcats of the A-League. The team
went to the league championship, but were defeated by the Rhinos. Miller rejoined the Rhinos in 2002, and played with the team until he retired in 2005. Throughout his career, Miller earned league all-star selections three times and was named Team MVP four times. He is the Rhinos all-time leader in goals, with 75, and points, at 166, and holds 17 individual scoring records. He was selected to the club’s tenth anniversary team in 2005. Miller has been inducted into the USL Hall of Fame as well as the Rochester Rhinos Hall of Fame.
College and Amateur
He was born in Succasunna, New Jersey and grew up in Roxbury Township, New Jersey. Miller earned a full ride athletic scholarship to Loyola College in Maryland, where he played all four years. He was team captain of the Greyhounds, and served as team captain during his junior and senior seasons. Miller finished his collegiate career in 1990, and graduated with a degree in communications and public relations in 1993.
Personal
Miller became the Director of Soccer at Team USA Pro-Soccer Camp, a youth soccer camp, in 1993. He was the Director of Player Development for the Greece Buccaneers. In 2005, he opened the Doug Miller Soccer Academy in Rochester, NY. In 2009 he purchased the Doug Miller Family Sports Park in Spencerport, home to Doug Miller Soccer. His methods and philosophy has made his program one of the best in WNY. He lives in Greece with his wife, Kari, and his two daughters Kayla and Kalista.