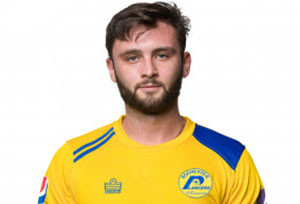 Born and raised in Rochester, NY, 22 year old Ciliberto attended Churchville-Chili High School and was a 2 time All-State and All-Greater Rochester selection. He was also the Monroe County Player of the Year and Scholar All-American his senior year.  Throughout his high school career Frankie recorded 21 goals and 19 assists. Frank attended the Worcester Polytechnic Institute and won the conference tournament and made their first NCAA appearance in 2017. He was only able to play 3 years due to an injury during his collegiate career but during those years he scored 8 goals and had 6 assists. Frankie’s father, Frank Ciliberto was an original Rochester Flash player in 1984 and one of SoccerSam’s all-time favorite Flash players.