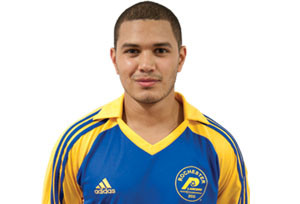 Born and raised in Mount Laurel, New Jersey, 33 year old Ortiz has had an extensive soccer career. He played college soccer for La Salle University where he scored 17 goals, had 11 assists and played in 60 games. Jeremy was named NSCAA Regional All American in 2006, he was a 3x Atlantic 10 All Conference player and a 3x Philly Soccer Seven player.  From 2006-2008 Jeremy played Semi-Pro for Ocean City Barons (PDL). He was the 2006 team MVP and had 19 goals, 6 assists and played in 40 games throughout his time with the team.

Favorite # and Why?
7. First # I started playing soccer with.

Do you play or have you played other sports?
Basketball

Best Advise someone has given you?
"If you can't hang with the big dogs, get off the porch." Patrick Joseph Farrell, my soccer coach at La Salle University

Do you have any hidden talents/hobbies people don't know about you?
Work in progress

If you could have dinner with 3 famous people who would it be and why?
The Rock, Will Smith, Barack Obama

What are your career plans after soccer/school?
Stockbroker