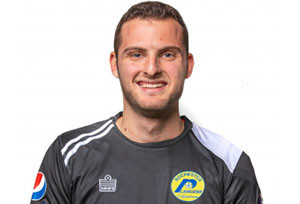 Born and raised in Rochester, NY, 23 year old Ciavaglia attended Rush-Henrietta High School. John was Monroe County second team in 2013 and Monroe County first team and All-Greater Rochester team in 2014.  He finished his high school career with 125 saves and a 1.08 goals against average. Ciavaglia went on to play his collegiate career at Roberts Wesleyan College from 2014-2018, where he was a starter for 2 ½ seasons. He was named team captain in 2017-2018 and led the East Coast Conference in saves his last two seasons. John was ranked 9th in all of NCAA D2 in saves in 2017 and he played a total of 43 games for Roberts. If the name Ciavaglia sounds familiar, it may also be because John’s cousin, Peter Ciavaglia is a former Buffalo Sabres and Rochester Amerks hockey player.

Favorite # and why: #1 and it just has been the number I have had my whole life.

Best advise: “Mistakes are just another word for experience. Take what you can and learn from it.”

Hobbies: In the summer I participate in bass fishing tournaments.